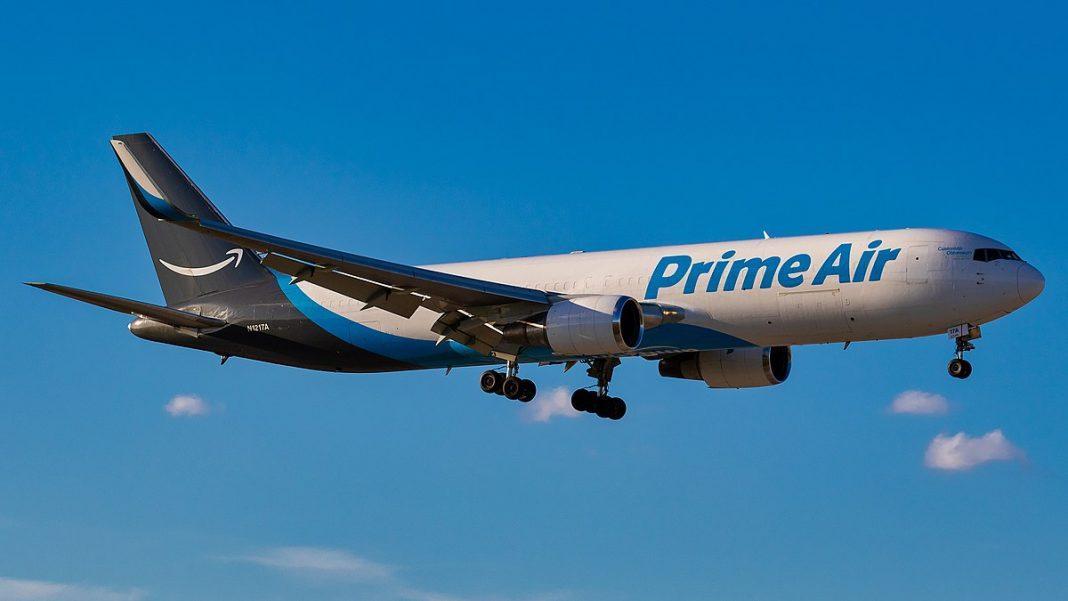 Amazon is literally too big to fail. Not only do they absolutely dominate anything and everything related to e-commerce, but they seem to be quite successful in many of their completely unrelated ventures.

We have hit TV shows only available to Amazon customers, brand new Amazon-branded products that outdo their competitors, drone deliveries, and a plethora of other products and services.

And now… according to Forbes, they are dipping their toes into the US airline industry:

“Amazon is buying 11 used Boeing 767-300 jets from Delta [4 planes] and WestJet [7 planes] as part of its rapidly expanding air cargo operation, the first time it has bought, rather than leased, planes for its fleet and a sign of increasing demand for cargo carriers and fast deliveries amid a pandemic that has seen passenger demand plummet.

The aircraft from WestJet are being converted from passenger to cargo use, the online giant said, and are expected to join the company’s growing Amazon Air network, which is made up of leased aircraft, in 2021.”

In case you didn’t already know, Amazon has a long history of leasing aircraft to help them ship products overnight (or within two days):

“Amazon leases most of its cargo aircraft through Air Transport Services Group, which provides the fleet with 767s, and Atlas Air Worldwide Holdings, which supplies 737s and 767s. Amazon has taken an ownership stake in both companies.

It also leased 15 737s through General Electric’s GE Capital Aviation Services, but in September went off in another new direction that hinted at the purchases to come when it directly registered one of its aircraft under its own name. That plane was also from WestJet.”

And it’s the perfect time for them to make this move – several airlines are now retiring planes in order to cut down on their costs due to lower travel demand. But in the meantime, e-commerce spending and online shopping have gone way up. As you can already tell, this opportunity literally fell in their lap.

Should the US airline industry continue to experienced depressed travel demand, Amazon’s goal of having 85 planes in their cargo fleet by the end of 2022 could be achieved as early as the end of 2021.

Yet there’s another sector that Amazon is directly targeting with this new move. Again, from the same Forbes article I quoted:

“Amazon still touts its reliance on third-party delivery providers like FedEx and UPS but the expansion of its air cargo network echoes its wider plans to bring delivery in house. It is possible that the online retail giant, which has a growing network of trucks, vans and planes, may one day be able to rival these services.”

Imagine being a giant in the e-commerce industry, the aviation industry, and the delivery industry… three brutally competitive sectors that are dominated by players who have survived and prospered for decades.

Now, Amazon has the opportunity to steal the #1 spot away from them.

The COVID-19 pandemic was singlehandedly the best thing to have EVER happened to Amazon in their 2.5 decades of existence. No other event in modern history will come close.

What do YOU think about Amazon getting their hands into the aviation industry? Will they be able to amass 85 aircraft under their wing by the end of 2022? Reply to this newsletter and share your predictions with us!

In Order to Stay Alive, A HUGE US Airline Merger Could Take Place…

I never thought we would arrive at the day where two major US airlines consider the possibility of combining together, but times are hard and you do what you can to survive.

According to Yahoo! Finance, the two most likely candidates for a merger & acquisition are United Airlines and JetBlue:

“We’re expecting M&A to occur. You could see United Airlines buying JetBlue. United is going back to JFK [airport] after an absence of a few years and it [JetBlue] has a big presence there… [industry analyst Helane Becker] has ‘Market perform’ ratings on both United and JetBlue.”

And if you don’t like the idea of one of the Big Four airlines (United, Delta, Southwest, American) merging, how about three smaller ones combining to take on the Big Four? Well, that was also discussed:

“You can see Allegiant, Frontier and Spirit merge. Those three airlines have a 3% market share, maybe a little more now since they are so domestic. They would be a really terrific competitor to the Big Four because they are so low cost and their so domestic and leisure focused… Becker rates Allegiant at ‘Market perform’ and Spirit at ‘Outperform.’”

Yet it would be a while before the second type of deal happened. Stock prices are at an all-time low, air travel demand is depressed, and there is a significant lack of cash flow.

But it’s something worth thinking about, especially if the COVID-19 pandemic continues on for another full year…

Have you SEEN airfare prices lately? I’ve literally never seen them so low, with some of them costing less than a lengthy Uber ride. You would think the world now exists in an alternate universe.

According to Barron’s, this is not the case. It first started with Southwest Airlines and now the trend will carry over to other airlines:

“Southwest Airlines may have kicked off a fare war with a $29 seat sale. It’s a sign that airlines are going to use pricing as a weapon to stoke demand as they brace for a tough winter season.

Southwest (ticker: LUV) has the strongest balance sheet of the major domestic carriers, and it is using its muscle to try to capture more market share. The airline launched a four-day sale on Monday, offering one-way fares for $29, including flights to vacation spots like Fort Lauderdale, Hawaii, Miami, and Long Beach, California.”

The rates apply to the lowest available fare, known as the Blue Basic class, which includes one carry-on bag (space-permitting) and a personal item and boarding in the last group.”

If you have any domestic trips in the US planned over the next 3-6 months, NOW is the time to make your reservations!

The World’s Safest Airline: The One That Wants Mandatory COVID-19 Vaccinations

Every year, AirlineRatings.com goes over 385 airlines and decides which one holds the #1 spot for safety. Factors that make up a part of an airline’s evaluation include fleet age, safety initiatives, crash and serious incidents records, and audits performed by industry and government.

The top five for 2021 were as following (in order from highest to lowest): Qantas, Qatar Airways, Air New Zealand, Singapore Airlines, and Emirates. Notably, Qantas was also the top dog in last year’s evaluation.

So why them, the airline who has announced they want to make COVID-19 vaccinations mandatory for all passengers? It has to do with a combination of their past practices and current practices related to COVID-19.

“Qantas was highly ranked for its position as a leader in the development of safety initiatives like Future Air Navigation System (a system which allows communication between pilots and Air Traffic Control), real-time engine monitoring and automatic landings using Global Navigation Satellite System.

Over the past 60 years, Qantas has been either the first or second airline in the world to implement 16 major safety enhancements across its fleet.

In response to the pandemic, Qantas altered its dining service and began social distancing while boarding, earning it seven out of seven possible safety stars in the ranking.”

Let’s see if they retain the #1 spot for 2022, although I suspect that any airline which doesn’t make COVID-19 vaccinations mandatory will quickly find themselves at the bottom of AirlineRatings.com’s list…

It’s Lockdown #3 for Israel, EVEN WITH COVID-19 Vaccines…

You wouldn’t imagine Israel to be one of the countries announcing a new lockdown, especially when you consider how quickly their vaccination efforts are going. From CNBC:

“Israeli officials have boasted that the country has vaccinated more people in the first nine days of its vaccine campaign than it had in total COVID infections since the beginning of the pandemic.

The country had already vaccinated roughly 7% of its population of more than 9.2 million as of last week. The Israeli Ministry of Health projects up to 90% of the ‘at-risk’ population will receive their second of two shots from the Pfizer-BioNTech vaccine within the next 25 days.”

Unfortunately, that success was quickly drowned out by the announcement of a third national lockdown. Like every other nation currently living under restrictive conditions, the culprit to blame is the new “B117” COVID-19 mutant, which is 70% more transmissible than the original virus.

And since a few cases involving this mutant have been found in Israel, it’s time to close the doors again and throw away the key. All residents must stay within a 1-kilometer radius of their home, with all nonessential businesses and schools set to close this Friday.

It would be a damn shame if the end of January comes around and the lockdown restrictions get more restrictive, proving how the COVID-19 vaccines are ineffective against the new mutant…

An odd topic to close off the newsletter, but one that might be exciting for certain people…

If you’ve ever wanted to be on a cruise ship and have the privilege to walk around without any clothes on, Carnival Corp might have you covered for 2022! TravelPulse reports on this breaking story with more details…

The voyage is currently scheduled to sail for two weeks and will depart from Tampa before making stops in Panama, Colombia, Bonaire, Curacao, Puerto Rico, the Dominican Republic and the Bahamas.

…The company also revealed the Carnival Pride would make nudist guests ‘feel right at home,’ according to Bare Necessities’ website, as the ship is adorned with classic nude statues and paintings.

All passengers are informed before booking that clothing must be worn any time the ship is in port or the Captain announces it’s required.”

I’m curious to know: Is this a type of cruise that YOU would ever go on? Should these types of cruises even be allowed, especially given the pandemic!? Reply to this newsletter and let us know where you stand on this “bare” topic!

Will 2021 Be Yet Another “Struggle Year” for Airlines?

How to manage your emotions when trading

Get Started With Bitcoin

How Did the Cruise Line Industry Perform in 2020?

The Lessons That Poker Can Teach You About Investing

By 2028, China Will Have the World’s Largest Economy