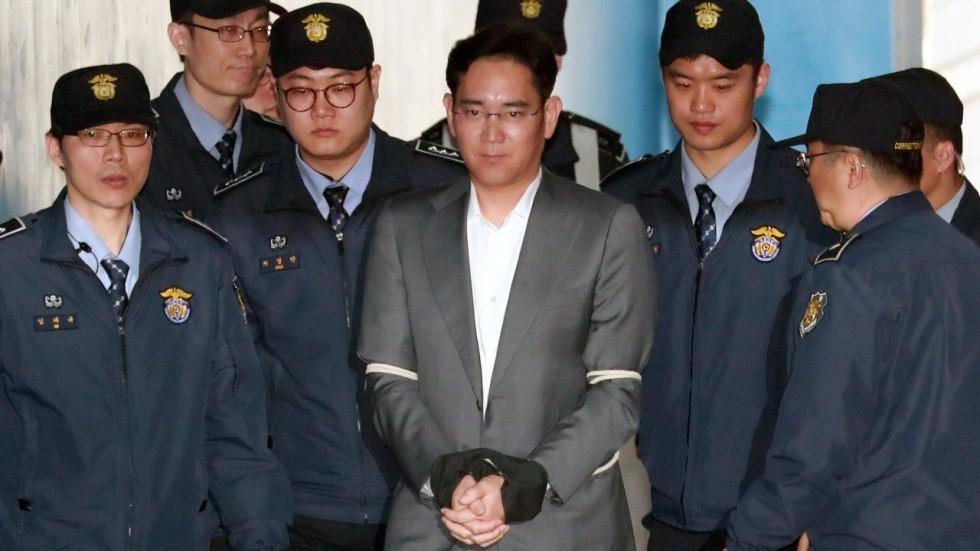 Listen, haven’t we learned our lesson about bribing people by now? Apparently not. Jay Y. Lee, the vice chairman of Samsung, is headed off to a nine year stint in prison thanks to being found guilty on bribery charges. This isn’t the last ruling for Lee, who’s involved in another trial alleging stock price manipulation and fraud.

It’s about time we see Lee go to prison for this since the bribery case started in 2017. Lee was convicted of bribing Park Guen-hye, Samsung’s former president, and her close associate Choi Soon-sil. Lee was sentenced to five years in prison for that allegation. Apparently Lee was trying to get government funding as a way to *hopefully* inherit control of the company from Samsung’s former chairman (and Lee’s father) Lee Kun-hee.

Park got impeached and had a 25 year prison sentence over his head. But then in 2018, he got a “get out of jail free card” thanks to an appeal, and we went right back to work at Samsung as de facto head, a position he gained when Lee’s dad had a heart attack in 2014.

Fast forward to 2019 where the Supreme Court overturned the appeal, instead ordering the case to be retried in Seoul, South Korea’s High Court. Lee’s father (Lee Kun-hee… we know, it’s a lot of Lee’s…) was South Korea’s wealthiest citizen until he died this October. Apparently he was worth $20.7 billion, so we’ll see if Jay Y. Lee, the alive Lee, gets most of that or if it goes to legal fees and taxes.

Amazon Isn’t The Only One That Can Ship Overnight

Ohi is a micro-warehousing startup founded by Ben Jones, who had an accident that left him temporarily paralyzed while he was getting ready to graduate from Stanford’s MBA program. It took him 16 months to recover and during that time he was completely reliant on e-commerce and on demand delivery.

Sinec Ben was born and bred in the UK, he was frustrated with how slow shipping was in the US and that he didn’t have easy access to some of his favorite brands. Most of them would take three to five or even more days to deliver.

After graduating Stanford in 2018, Ben decided to start his own business helping DTC (direct to consumer) brands expedite their shipping speeds and, ahem, compete with Amazon. Ohi has small fulfillment centers in metropolitan or densely populated areas so DTC brands don’t have to be as reliant on FedEx and UPS shipping.

Ben was certainly on to something since we’re seeing the micro fulfillment center concept pop up more and more. Warehousing is a huge bottleneck in e-commerce right now and companies like Ohi have the solution. Be has raised $2.75 million in seed funding so far and Ohi provides same day and two hour shipping for its partnered brands. If your brand has a geographic location that sees 5,000-10,000 orders per month, partnering with a micro-warehouse is something you’ll want to look into!

Turn Your Side Hustle Into A Startup The Easy Way

Okay, we all know nothing in life is easy, but when you have money, growing a business is a helluva lot easier. Popular investor Cory Levy, who runs pre-seed fund First Text and encourages entrepreneurs to text his personal phone number their startup ideas, is launching Z Fellows, a one week bootcamp that helps entrepreneurs turn their idea into a business.

Z Fellows isn’t like your average accelerator or cohort. It pays for each entrepreneur’s incorporation of their company and offers a $10,000 investment (that converts into stock). Plus you get all the perks like private office hours, speaker events with investors like arc Randoph (Netflix cofounder), Sean Rad (creator of Tinder) and Naval Ravikant (AngelList cofounder).

Cory wants to provide an intensive one week that gives first-time founders wiggle room to experiment without having to quit their job, or their schooling, or waste a year of their time. It’s to test if the founder is willing to go all-in on their idea before taking bigger risks that oftentimes don’t pay off.

Do you think there should be more cohorts like this versus the more traditional ones? Hit reply and tell us what you think!

USING P/E RATIOS TO BET ON INDUSTRIES – A CASE STUDY

Should You Abandon Index Funds During the Coronavirus?

3 Careers for Those with an Economics Degree