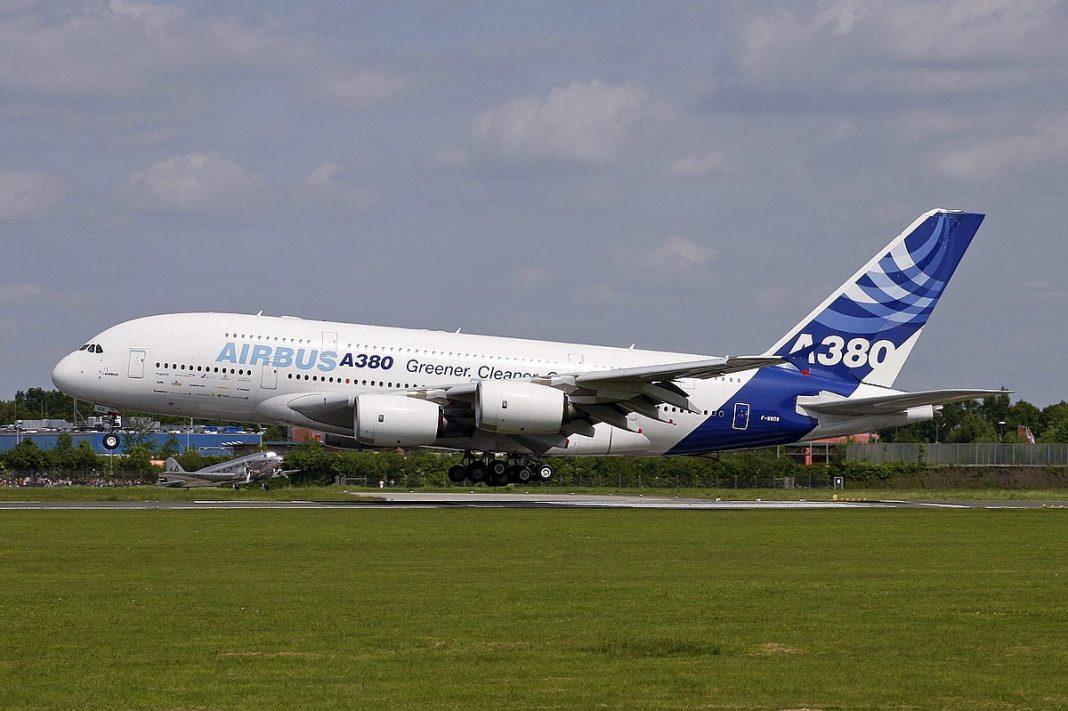 With flight demand at an all-time low and several airlines wondering how many months of survival they have left, you have to wonder what’s happening to the planes. Since they’re not being sold to airlines like they used to and certainly not being flown as often, plane manufacturers are starting to see their best-selling products fade into nothingness.

This is sadly the case for the famous Airbus A380, which can carry up to 550 passengers at a time. Daily Mail UK reports on the unfortunate fate of the aircraft as of now:

“Over 90 % of A380s – nicknamed ‘superjumbos’ – have spent the last nine months grounded and it is unclear when or if they will be airborne again.

According to Cirium, the aviation data company, only 21 out of 243 Airbus A380s were still in service at the start of this month because of concerns over rising costs and low passenger demand.

Air France became the first carrier to permanently withdraw the superjumbo, accelerating a plan to prematurely retire its 10 A380s by the end of 2022. Across the border in Germany, Lufthansa has removed all its A380s as well as single-deck A340-600s from future planning.

Singapore Airlines, the type’s second-largest operator, decided to permanently retire seven of its 19 stored A380s because of the crisis.”

At this point, it seems like the Airbus A380 is facing a retirement that will last several years, if not forever. While the typical aircraft lasts for around 30 years before being put away, the A380 is facing a lifespan of just 13 years since it first came into commission in 2007. In this case, this makes the A380 has the shortest lifespan of any plane in existence.

Mind you, this is NOT the first time this has happened this year.

Just three weeks ago, Boeing’s 747-8 four-engine aircraft had its final flight on British Airways. It was one of the signature planes for the plane manufacturer. 122,358 hours flown, 14,016 flights, and 60 million miles travelled for just that airline alone since February 1993. And this aircraft had its debut in 1970!

In around two years, the final 747-8 will be produced for an airline who will hopefully have some need for the aircraft and buy it. However, it seems as if twin-engine aircraft are now going to be the preferred option for airlines and long-lasting flights for the foreseeable future.

It’s truly a tragic time for Boeing and Airbus, and I’m sure this time will eventually come for other plane manufacturers. Their options are quite limited:

But I’m curious to know: What do YOU think about this tragic news for both Boeing and Airbus? Will other large-sized planes soon start facing the demise of retirement? Reply to this newsletter and share your predictions with us!

Hundreds of millions of COVID-19 vaccines from several pharmaceutical companies will need to be distributed worldwide, now and in 2021. And in order to make that happen, you’re going to need a LOT of airlines offering their cargo planes to get the job done.

German airline Lufthansa Cargo has decided to step in and help out, taking on the extraordinary challenge of delivering vaccines as rapidly as possible while keeping them under specific temperatures to keep the vaccines stable.

And to further entice governments and the pharmaceutical industry into doing business with them, they’ve unleashed a new service called “COVID-19 Temp Premium.” From Breaking Travel News:

“COVID-19 Temp Premium will be bookable from January 11th and will provide a high level of comprehensive and personalized customer service along the travel chain.

This includes seamless monitoring of vaccine shipments throughout the entire process and a 24/7 after sales customer support.

This isn’t the first time Lufthansa has been tasked with transporting pharmaceuticals, as they’ve been doing so successfully for several years. But the COVID-19 vaccine presents a difficult challenge with respect to speed and precision, so they’ll need to have all hands on deck if they want to pull this extraordinary feat off…

I never knew that “emotional support animals” (ESAs) were a thing in the aviation industry, but apparently they are. And as of January 11, they will no longer be allowed on any flight with Alaska Airlines and will instead be treated as ordinary pets for passengers

This follows the same decision being made earlier this month by the Department of Transportation (DOT), as Travel + Leisure reports:

“…airlines are allowed to treats ESAs as pets, not as service animals. This distinction allows airlines to strip ESAs of the privileges that are given to service animals onboard flights — which include boarding for free, ignoring weight, size, and capacity restrictions placed on passenger pets traveling in the cabin, and sitting outside of a carrier for the flight.”

Alaska Airlines’ director of customer advocacy Ray Prentice provided further explanation as to why this decision was made:

“Changes to the DOT rules came after feedback from the airline industry and disability community regarding numerous instances of emotional support animal misbehavior which caused injuries, health hazards, and damage to aircraft cabins.”

Not the type of change I would expect from the DOT, but it’s definitely bad news for any traveler who loves taking their pets with them…

With Airlines Considering Mandatory COVID-19 Vaccination, Will Cruise Lines Do the Same?

We’ve seen a number of international airlines express a strong desire to have every single passenger vaccinated for COVID-19 before they travel. However, it’s unclear if the cruise line industry intends to go down this same path.

According to The Motley Fool, it’s not unreasonable to assume they will:

“The average age of a passenger is 47 according to the Cruise Lines International Association, but many of the customers on sailings tend to be retirees with the means to travel.

The CDC hasn’t offered guidance on what the requirements would be if everyone on board – passengers and crew – had proof of completing the vaccination process. However, it doesn’t seem as if the three cruise lines are rushing to complete the battery of obstacles that the CDC established on the eve of Halloween.

…keep in mind that Norwegian Cruise Line was requiring everyone over 70 to prove their medical fitness – with a doctor’s note – in early March before it had no choice but to shut down.”

It’s worth mentioning that the CDC, WHO, and other health organizations worldwide have been extremely strong proponents of the COVID-19 vaccines. So even though they haven’t said anything yet, we can expect an announcement around the time when cruise lines finally meet all of their requirements for safe cruising. And who knows when that will be? I certainly don’t.

But I’m curious to know: If YOU had to get vaccinated for COVID-19 before hopping on a cruise, would you change your mind and not take a cruise vacation? Would it be an absolute dealbreaker for you? Reply to this newsletter and let us know!

Travel can be expensive enough as it is, even with all of the credit card hacks and secret airline deals we can get our hands on. So there’s nothing worse than hearing you’ll have to budget your spending for additional taxes at your destination.

This may not be a worrisome issue for you right now, but it will be if you ever choose to travel to the state of Quintana Roo in Mexico. From ZeroHedge:

“One state in Mexico has announced it will increase its tourist tax, which may have an impact on cruise ship guests. The Mexican state of Quintana Roo, which is where the popular ports of Couzmel and Costa Maya are located, announced new $10 tourist tax on foreigners.

There are no details yet on how the tax will be collected, nor if it applies to cruise ship visitors or not. Typically, cruise lines pay the port a per-passenger tax already when ships visit a port.

The new tourist tax would go into effect beginning April 1, 2021, and is intended to help make up the deficit the area has seen as a result of fewer tourists visiting in 2020 due to the global health crisis.

…in November 2019, Cozumel announced its first tax on cruise ship passengers with a 65 cent per passenger tax to pay for security, environmental and civil defense projects.”

Yikes. I don’t know how much this tax will add up to when I look at the total cost of the trip, but I have a feeling it will make me second-guess visiting that place ever again!

How 2020 Ended for the Euro and the British Pound

In forex-related news, The Financial Times reported on the year-end results of the Euro (EUR) and the British Pound (GBP). And overall, it was a fairly solid year for both currencies:

“The Euro climbed to its high of the year on Wednesday, taking its gains in 2020 close to 10%.

The currency rose 0.5% against the dollar to a peak of $1.2309, its highest level since 2018, extending a rally that has endured since the summer.

The Euro rally is mostly the result of a drop in the dollar, which slipped a further 0.3% on Wednesday and has lost about 7% against a basket of other major currencies in 2020.

Meanwhile, the British pound came close to breaking its high of the year, gaining 0.7% against the dollar to $1.3580 as MPs in London prepared to approve the post-Brexit trade deal with the EU that was finalized on Christmas Eve. Sterling also gained 0.4% against the euro to €1.1062.”

This year, it was COVID-19 and Brexit that led to these two currencies experiencing some very volatile movement. For any trader who was focused on the EUR cross-pairs or the GBP cross-pairs, especially during the London and New York trading sessions, you either made a ton of money or lost a ton of money.

In 2021, I expect that all currency-moving evens will 100% revolve around the ongoing COVID-19 pandemic and the end results of the approved vaccines. Because if those don’t work in stopping the pandemic, God knows what will…

Quarantine-Free Flights: The Future of Travel?

How to Trade the After-Market Movers

CureVac Started the Day Worth More Than Novavax. Then Its Vaccine...