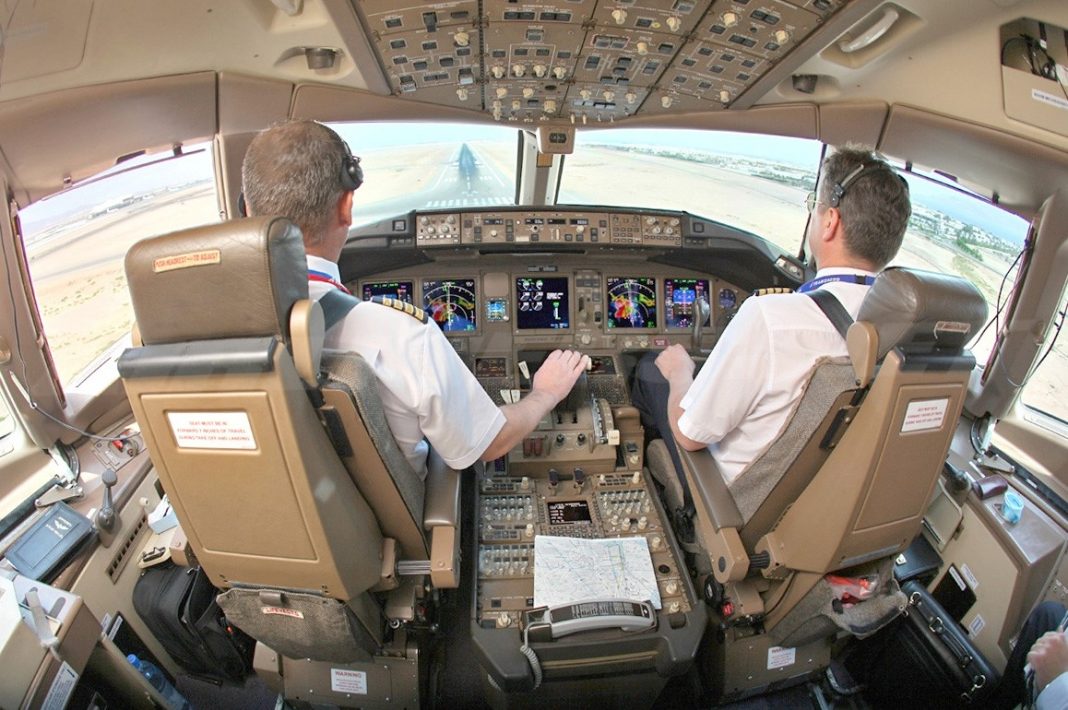 A week ago or so, it was reported in the news that the finance industry was fighting to get their workers vaccinated for COVID-19 well-ahead of the general public (but just right after the healthcare workers). This caused an uproar on social media, with people chastising the finance industry for their never-ending greed.

But it appears as if a new group of individuals want to get the COVID-19 vaccine on a first-priority basis: Airline pilots.

The Air Line Pilots Association (ALPA), the largest US pilots union representing 59,000 of them across companies such as Delta and United, wants their workers to get the vaccine right after the frontline workers.

Here are some excerpts from the original proposal, which was written by ALPA president Joe DePete to the Centers for Disease Control and Prevention:

“Airline pilots are required to maintain medical certification from the FAA, but approval for use of the vaccine is required by the agency before it can be administered to flight crews.

It is essential that the FAA approve this vaccine for use by airline pilots as soon as possible following [FDA approval].

It is critical that, following the initial distribution, airline pilots are provided priority access to the vaccine… Ensuring this prioritization will allow the logistical component of transporting the vaccine to continue unencumbered.”

The Federal Aviation Administration (FAA) has also issued a statement about administering the COVID-19 vaccine pilots. It is important to note that pilots will have their medical certificates suspended if they take any vaccine or medication before the FAA approves it, which usually takes a year after FDA approval:

“…[We] are closely monitoring the active vaccine trials and awaiting the outcome [of the FDA hearings].

While the agency has made no final decisions, we are prepared to evaluate the use of each vaccine by medical certificate holders as soon as an emergency-use authorization is issued…

However, given the nature of the current public health emergency, the FAA’s Office of Aerospace Medicine will expedite its review of the emergency-use authorizations for the vaccines.”

Because unlike the finance industry, which is doing better than ever, the airline industry is seriously struggling and needs whatever form of support they can get.

But I want to know your opinion on this matter: Do YOU believe that it is fair for pilots to get the COVID-19 vaccine before the general public? Reply to this newsletter and tell us how you feel!

Australian airline Qantas Airlines generated a lot of controversy when they announced that they want COVID-19 vaccinations to be mandatory for all of their passengers. Philippines airline Cebu Pacific was next in line.

We now have a third airline joining this small group of airlines, and its name is AirAsia. At least, according to CEO Tony Fernandes in a statement he made two days ago:

“I foresee in Asia, anyway, I think they won’t let anyone in without a vaccination… It’s not up to the airlines to decide…It’s for governments to decide. It’ll be the country that’ll decide if they will allow people to come in if they are not vaccinated.”

And given their recent integration of digital health passport Scan2Fly, it appears as if this comment was not made carelessly. The app, which is going to be eventually be used for all airports offering AirAsia’s services, allows people to voluntary upload their health information during online check-ins and check-outs.

This is the future we may see manifesting in US airlines. Immunity passports, digital proof of COVID-19 vaccinations and tests… it will all be made mandatory for anybody who wants to travel.

No amount of black market hackery or tricks will be able to bypass these systems. They’re being run by people who have too much money, power, and influence in deciding the future of the aviation industry.

Might as well suck it up and take the stab when you visit your doctor next time!

As we all know, cruise lines are having one hell of a difficult time with getting their ships sailing again. On top of dealing with numerous international travel restrictions, they have a huge mountain to climb over in the form of new health regulations that must be followed going forward.

Royal Caribbean was a recent victim to this madness when a four-day trip on their Quantum of the Seas vessel had to be stopped because an 83-year-old passenger tested positive for COVID-19 (notably, he tested negative like everyone else before boarding).

As a result, the entire trip was cancelled and the ship was immediately re-directed to its departing port at Singapore. Everyone had to quarantine themselves on the way back and it was a flat-out disaster.

Except… this same passenger tested negative TWICE when he was tested again. Right after the trip ended and the ship was docked. It is now believed that the initial test the man took was a false positive, (i.e. the test said he had COVID-19 but he didn’t actually get infected).

I’m just curious to know how many more times this is going to happen for all cruise trips going forward. And how cruise lines are going to account for the possibility of false COVID-19 trips.

A LOT of people are going to be sorely inconvenienced if this incident repeats itself, and it will certainly mark the death of the cruise line industry as we know it.

How Brexit Could Stop British Tourists from Traveling to Europe

While the UK’s liberation from the European Union (EU) in the form of Brexit might lead to independence, that gain could come at a heavy cost. Especially for the Brits who love traveling and exploring the continent of Europe.

From The Daily Mail:

“British holidaymakers could be banned from entering the EU after Brexit under strict coronavirus travel rules rules [as of January 1] that affect non-EU countries — unless officials grant a last-minute exemption.

…Despite the UK having lower infection rates than 18 of the 27 EU member states, officials say there are currently ‘no plans’ to add Britain to the ‘safe’ list, which is reviewed every two weeks.

…Britain would not automatically be exempt from the third-party country rules even if Boris Johnson were to strike an 11th hour deal with EU chief Ursula von der Leyen in Brussels this week.”

Keep this in mind: Unless a country has an infection rate lower than – or equal to – the EU average on June 15 (where cases were very low), they will not be added to the “safe list” mentioned in the quote.

Obviously, essential workers would be the exception to the rule, but this is a metaphorical death warrant for non-essential travelers who enjoy leaving the UK every now and then.

So for the Brits reading this, perhaps it’s time to find other non-EU destinations to cross off your travel bucket list!

For all its faults and merits, you can’t deny the technological prowess of the United Arab Emirates. In places where America and other first-nations perish, they seem to prosper.

“Police in Abu Dhabi, United Arab Emirates (UAE), are planning to install a monitoring system built with artificial intelligence (A.I.) that will detect road users who do not wear their seatbelts or who illegally use their mobile phones while driving, the government announced Monday.

The ‘VAST’ (Vehicular Attention and Safety Tracker) system, aims to preserve the safety of drivers, passengers, and all road users, as well as raising awareness and educating the community on the importance of following safe driving practices, as part of efforts to lead the digital future of the Abu Dhabi Government and enable an innovative and effective digital government.”

I don’t know the extent to which this technology is developed, but authorities are claiming it can already account for human error.

It will be rather interesting to see just how accurate this system is in detecting driver misbehavior. I can definitely foresee the undone seatbelts being accurately tracked, but I can’t express the same degree of confidence with drivers checking their mobile phones.

Let’s see how this pans out – regardless of the implications on invading privacy, it’s another sign of progress in the age of Big Tech.

If you love dining in an airplane and getting a taste of the food offered to wealthy business class passengers, Singapore is the place to be. According to Forbes, people are LOVING the experience of sitting in a grounded airplane and paying for overpriced meals:

“Singaporeans are booking reservations weeks in advance for the chance to pay $40 to $525 to dine inside a parked Singapore Airlines Airbus 380 super widebody.

…Once there, they pay $475 to $875 a person to enjoy everything from a conventional 1970s economy class inflight meal served on plastic trays to a lavish first class feast served on fine airline china and crystal.

…it is served inside a giant Boeing 747 ‘set’ by beautiful actors dressed in 1970s airline uniforms. The dinner theatre-style production is called the Pan Am Experience because it seeks to replicate what it was like to fly — and eat while doing so — in the 1970s.”

Sounds borderline ridiculous. Don’t get me wrong, I love the experience of fine dining in first class during a long flight, but I WOULD NOT pay that much just to re-create the feeling on a grounded airplane.

But what about you? Would YOU be willing to fork over hundreds of dollars just to eat fancy food on a parked airplane? Reply to this newsletter and tell us if you would – or wouldn’t!

Will $17 Billion Save US Airlines from Financial Doom?

Are There Any Safe Alternative Investments?

Moon’s Money Trades Review | Is It Worth The Cost?