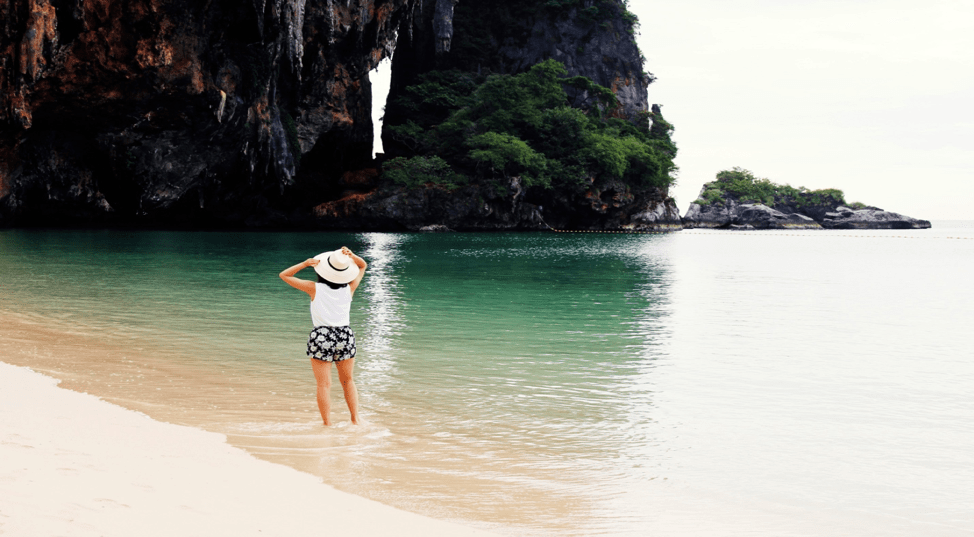 As digital nomads, we have financial struggles that the average American does not have to deal with. Our budget has to be far more flexible in order to accommodate constant travel and ever-changing dollar amounts depending on where we are located.

It can be a challenge to figure this all out ourselves, but the easiest route towards financial success as a digital nomad is to take the advice of those who have successfully lived the nomad lifestyle.

30-year-old Cecilia Meis has been a nomad for the past 3 years and makes $8,000 per month as a freelance editor. Not only does Cecilia have her own passive income stream, but she’s now able to manage her budget for living and traveling stress-free.

Always have enough money to return to your home destination: At the bare minimum, you should have sufficient funds set aside for an emergency trip home. That includes the flight cost, paying upfront money for an apartment, and affording basic expenses. For Cecilia, that means having a minimum of $5,000 saved up if this situation ever arises.

Your budget should cover the cost of living for your next location: Due to the nature of being a digital nomad, where you choose to stay will dictate how you distribute your money. You don’t have to necessarily alter the total amount, but you may have to set aside more money for living expenses than entertainment expenses.

Daily budgets are superior to monthly budgets: Again, the ever-changing costs of living are entirely dependent on your situation. A monthly budget is far too flexible compared to a daily budget in Cecilia’s mind, which is why she has a fixed daily amount for categories such as groceries.

Travel credit cards are your best friend: There are numerous credit cards that let you rack up enough reward points to cover for flights, hotels, car rentals, and other perks. Since the majority of your expenses are travel-related, you might as well take full advantage of what you’re already spending money on (just make sure to pay your bills on time every month!).

EVERYTHING is negotiable: As a digital nomad, you should not be passive or shy when it comes to re-negotiating the price on everything possible. Cecilia claims she has negotiated prices for items such as groceries and her monthly rent.

Build up numerous income streams: On top of numerous freelancing contracts, Cecilia also rakes in $600/month by selling templates that other freelancers can use to better perform their jobs and budget their money.

Wow – a lot of useful nuggets to take note of! Some of them might apply to you, or none of them will, but it’s helpful to hear how other individuals are managing a lifestyle previously thought to be too expensive.

What do YOU think about Cecilia’s advice for being financially successful as a digital nomad? Anything you agree or disagree with? Let us know your thoughts by replying to this newsletter!

A Billion-Dollar Order from Ryanair for 75 Boeing 737 MAX Planes – The Rumors Were True!

Just two days ago, it was rumored that low-cost European airline Ryanair was poised to make a VERY big order of Boeing’s signature 737 MAX planes.

Due to the recent approval from the Federal Aviation Administration for the 737 MAX to be used for commercial flights after 20 months of being grounded, airlines worldwide now have a newfound interest in the aircraft.

Ryanair had this to say about their grand purchase in a press release statement:

“Now that the Boeing MAX aircraft has been certified by the FAA to return to service, Ryanair expects to take the first deliveries of these new fuel efficient and environmentally friendly aircraft from early 2021, and has confirmed 210 firm orders with Boeing for these game-changer aircraft, which will be delivered over a 4-year period between Spring 2021 and December 2024.”

Until that second stimulus package from the federal government arrives, US airlines are going to continue firing as many workers as possible to cut costs and keep themselves alive.

One of such airlines is Southwest, who has a known reputation for NEVER laying off or furloughing employees in their almost 55-year history, no matter the financial recessions that came about. But a recent announcement from Southwest says that 6,800 employees are at risk of being furloughed (~13% of the airline’s entire workforce).

This news was not taken well by the Southwest Airlines Pilots Association, who referred to this move as “a vindictive act of playing with employees’ emotions right around the holidays”. While announcements of furloughs are generally given 60 days in advance of the date, Southwest is going for a 90-day period as this is required by some states in America.

The reason for this announcement has to do with their “inability to secure a 10% reduction in 2021 spending for each working group”. Southwest’s currently daily cash burn rate is $11 million, and their only way out of this mess is if union workers agree to measures that could include a 10% pay cut.

Let’s see how this news plays out, because it will forever leave a bad taste in the airline industry if Southwest has to do something they’ve never done since 1967.

If you are struggling to choose the perfect city to live in for your future retirement, an online tool created by MarketWatch might make the decision-making process easier for you.

The tool allows you to choose certain must-have criteria for your ideal retirement spot, and then spits out numerous locations across America as helpful suggestions. Said criteria include:

You can choose to prioritize these criteria on the basis of “nice to have” or “must have.” Furthermore, there are numerous options within each criterion that allow you to be more specific in dictating your needs.

When you are finished, MarketWatch will spit out a number of American cities that meet your criteria. You’ll see exactly how these destinations meet your criteria, and you’ll also see how the match up relative to your desired cost of living.

Give it a spin and see if you can find your perfect retirement city! It would be nice to see some international data for out-of-country destinations, but this tool is nevertheless a great guide to eliminating options that don’t fit your needs.

Imagine Being Stupid Enough to Manually Edit Your own Boarding Pass…

One of the great yet unfortunate things about social media is that “the Internet remembers forever.” All of the wise and stupid decisions you make are eternally available for the rest of the world to see.

TIkTok user “robkallday”, whose real name is Rob K., is now having to learn this lesson the hard way.

He had the stupid idea of creating a video on the social media platform where he is seen using a photo editing tool to artificially change his boarding pass for Spirit Airlines. Why? He wanted to have the privilege of carrying a large carry-on bad onto the plane without having to pay for it (as Spirit charges extra fees for any carry-on luggage that has to be stored overhead).

Rob claims that he did not actually USE this hack towards a flight he took, but this act of idiocy did not escape the watchful eyes of Spirit Airlines, who sent him the following letter:

“As you know you created a video on the social media platform TikTok showing users how to manipulate a Spirit Airlines boarding pass and fraudulently indicate they paid for a carry-on bag to the financial detriment of Spirit Airlines.

In light of this egregious misconduct, Spirit Airlines has determined that you are no longer permitted to fly with us and we have placed you on a list for this purpose. You are also barred from entering Spirit’s facilities.”

This means he cannot buy a ticket before the ban is lifted, and he will have to wait a full two years before he flies with Spirit Airlines unless he attempts to plead his case.

What can I say? Play stupid games, win stupid prizes.

But what do YOU think about Rob’s ban from Spirit airlines? Is it justified, or should he not have been banned since he did not use this hack on an actual flight? Reply to this newsletter and tell us what you believe should have happened to Rob!

Italy’s ski resorts are facing what could be the biggest loss in several decades, and it’s all thanks to the COVID-19 pandemic and the ensuing restrictions implemented by the Italian government.

Giovanni Brasso, who operates a ski lift operating company in Sestriere, says 45% of the revenue generated in the winter season comes from the Christmas holiday. Without their usual holiday activity, they may have to close for the entirety of the season. And this is a man who employs 350 full-time workers!

Gianfranco Martin, who owns the Lago Losetta hotel, says he will lose 60% of his annual turnover if the current restrictions hold (i.e. having to stay closed until January 10th). His only other option is to invest $590,000 into the creation of artificial snow to make up for the lack of snow in Sestriere, but even that has no guarantee of any return on investment.

The sad part about all of this is that these ski resorts could easily remain open during the pandemic. Since skiing is an entirely outdoor activity that necessarily involves large distances between people, it would be more than possible for the government to reach some sort of compromise.

But alas, this is not the case. And several people who work in this industry are now being forced to live on government support of €600 per month without any additional source of income.

2020 will forever be remembered in history as one of the saddest times to be alive.

‘If you see a deal, you should buy it’: Frontier Airlines...

5 Things Your Insurance Advisor Will Tell You That You Should...

How to Learn Which CBD Gummies Stocks Are Worth Investing In

How Are We Gonna Ship Hundreds of Millions of Vaccines!?