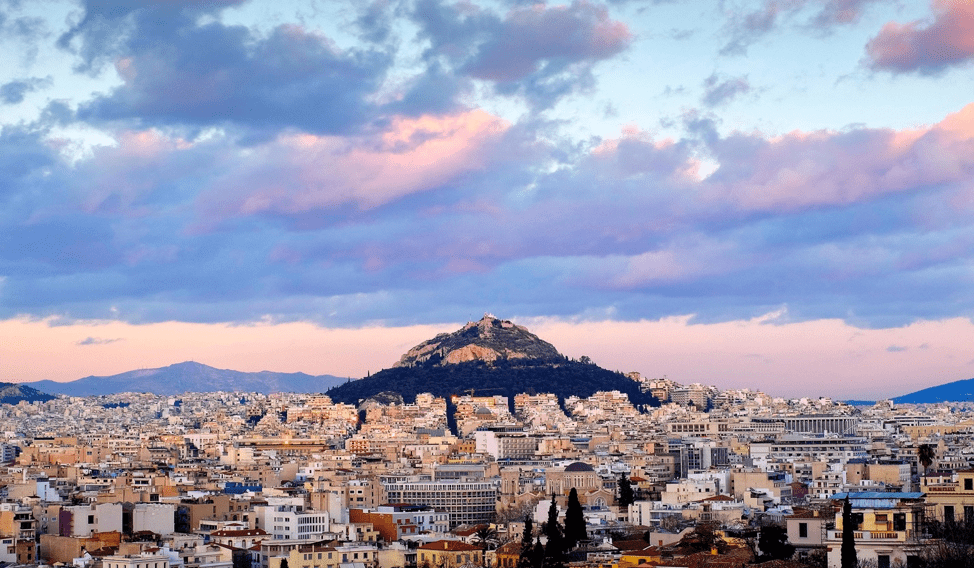 MarketWatch recently released a profile on two Americans in their 60s, Daniel Barthlow and Linda Pickney, who successfully moved to Athens, Greece mere weeks after Linda retired from full-time work. Not only were they able to easily make the transition from living in Tampa, Florida, but they’ve been comfortably living in Athens for the past 3 years.

Oh, and one other thing to mention… Neither of them have spoken a single word of Greek!

Let’s first go over the financial details, as those are usually the most important factor for any American seeking to live in international waters. Here is what their monthly budget looked like:

Next, let’s explain the big elephant in the room of being unable to speak the country’s native language. To Daniel’s surprise, there hasn’t been any need to speak a second language fluently:

“Learning Greek just hasn’t been necessary since so many speak English… We’ve had a couple of occasions when we’ve asked our apartment neighbor who speaks excellent English to talk to a technician for us who only spoke Greek.”

In terms of lifestyle, both Linda and Daniel are living the nomad dream. Their budget allows them to eat out at least four times a week, with high-quality meals apparently costing 30% to 50% less than what they would have normally paid in the US.

And while Greece is still in the middle of a pandemic, their livelihoods haven’t been affected. Linda is fully retired and Daniel earns his income as a day trader who specializes in technical analysis. So all in all, they get to live a more convenient lifestyle. Not to mention they have done well for themselves with taxis and public transportation – no cars necessary.

Finally… let’s briefly talk about the legal matters behind their immigration, and I will directly quote the article:

“The couple needed about three weeks to collect necessary documents before going to the consulate in Houston, then another four days to come up with additional documents requested at that appointment. Three days after that, they had their visas.

Once in Athens, they applied for two-year visas… showing up at the immigration office and waiting until their number was called. Then they needed to get a Greek tax number and Greek Social Security numbers, all complicated by shutdowns over the Christmas holidays.

They also needed to show they had no criminal convictions, could support themselves — a minimum monthly income of €2,000 ($2,400) apiece — a lease on an apartment and a note from a US doctor attesting to their health.”

Not bad at all! Seems like a fairly straightforward process for attaining temporary residency status in Greece, and the COVID-19 pandemic only guarantees their visas will be extended for the next few months.

But I’m curious to know: What do YOU think about Daniel and Linda’s setup in Greece? Does it sound realistic, or are there key details being left out of the picture? Reply to this newsletter and share your experiences with us!

After 20 Months, the Boeing MAX 737 Is Officially in the Skies Again

2020 is proving to be the miraculous comeback year for plane manufacturer Boeing. They have finally received approval from the Federal Aviation Administration to resume flying their signature 737 MAX aircraft, following two tragedies in early 2018 that led to the deaths of hundreds of passengers.

Boeing also had another significant development in the form of American Airlines offering to fly their employees (alongside reporters) on a 737 MAX plane later this week. The initial flights will go from Dallas, Texas to Tulsa, Oklahoma before commercial flights between New York and Miami are scheduled to start on December 29.

And on top of all that, word on the street is that low-cost European airline Ryanair is poised to purchase 75 Boeing 737 MAX planes. Granted, Boeing has over 400 ready-to-go planes that need to be delivered, but this is a step in the right direction.

For the sake of Boeing, let’s hope more good news comes their way in 2021!

“Elite Status” at Hyatt Hotels Is Now HALF the Original Price!

For those of us who enjoy being a part of loyalty rewards programs created by international hotel chains, you’ll be happy to know that the earning requirements for Hyatt’s “World of Hyatt” guest loyalty program have been slashed by 50% for 2021!

Other notable benefits running through February 28th, 2021 for “World of Hyatt” members include the following:

And for those of you who are still hesitant to sign up for the program, registering for a card before December 31st grants you 10 Tier-Qualifying Night credits.

What can I say? It’s an extraordinarily prosperous time for any traveler who wants to get the best of the hotel industry and save money doing so.

For as long as we can remember, dozing off on an airplane is a privilege. I cannot understand how people can sleep peacefully and comfortably on the cramped economy seats, and the pleasure of an adequate sleeping space necessarily requires you to purchase a ticket for 1st class and/or business class.

European airline Lufthansa wants to change this on-going trend, adding a new line of seats to the economy class known as “the sleeper’s row.” Rather than install brand new seats, passengers can reserve an entire row of 3-4 seats to give them as much leg room as possible. They’ll also be provided with a blanket, pillow and mattress for added comfort.

(And yes, they will get priority boarding before the rest of the passengers flying in the economy class.)

These “sleeper row” seats will be priced at $350 a pop, and are currently under trial on the Boeing 747-8 planes flying between Sao Paulo, Brazil and Frankfurt, Germany. If all goes well, Lufthansa intends to roll out this new feature across all of their flights.

No Phone Calls Allowed During Flights, Says the FCC

Have you ever wondered why you aren’t allowed to take calls on your cellphone during a flight? You can do literally anything else except answer calls on a plane – watch movies and TV shows, listen to music, go shopping, surf the Internet, eat and drink to your heart’s content. But your personal and business calls will have to wait.

Well, wonder no more, as the Federal Communications Commission (FCC) has officially blocked a seven-year-old proposal that would allow people to take cellphone calls from 10,000 feet above the ground. This seemingly innocent action is apparently allowed in flights within Europe, but it won’t be allowed in the US anytime soon.

In the ruling issued last week, the FCC had this to say:

There is strong opposition to the Commission’s proposals from many commenters in this proceeding, including our nation’s airline pilots and flight attendants, who argue that it ‘fail[s] to address significant safety and national security concerns.’”

Keep in mind that this ruling was strongly supported by flight attendants, pilots, AND passengers. It seems to be one of those hot-button issues that generates significant controversy within the aviation industry.

That leads me to the question I have for you: How important is it for YOU to be able to take cellphone calls while flying? Would you like to be able to do it, or do you feel indifferent about it? Reply to this newsletter and share your thoughts with us!

How Will Airlines Persuade Business Travelers to Start Flying Again?

Business travelers are far less eager than ever to step foot in an airport. With conferences being held virtually and all of their work being virtual in nature, why would they bother leaving their home? And why would companies waste money on hefty travel expenses?

Their reasoning is certainly sound, but it’s bad news for the airline industry. Considering that they are responsible for 75% of an airline’s profits despite making up for 12% of all passengers, it’s in the best interests of the aviation industry to get these lucrative customers spending money again.

According to a CNBC After Hours segment hosted on Tuesday night, here is what airlines are doing to hopefully convince business travelers to return: Hosting a comprehensive COVID-19 safety tour to squash all their fears and concerns.

“They take company representatives through all the steps from check the steps taken to mitigate any possible occurrence of COVID-19. Checking in, border security, boarding the plane, staying in the plane – every last part of the travel experience.

That means touchless entries wherever possible, passengers being spaced 6 feet apart in planes and in waiting seats), and full disclosure in how planes and airports are being kept as coronavirus-free as possible.

Ideally, the representative goes back to the company’s risk management team and states they feel safe and comfortable sending out executives and salespeople on the road again. So in order to pull this off, airlines have to work harder than ever with companies to convince them to invest in business travel.”

The aired segment also revealed why corporate travel is a particular focus of airlines right now:

But don’t expect companies to get excited just yet. The segment concluded by saying it will take another 3-4 years before corporate travel returns to pre-2020 volumes, so this process is a long-term investment into restoring the most valuable customers of any US airline.

Are Cable Companies Worth Investing In?

How to Grow Your Small Businesses

The Fall of the US Dollar and the Rise of Asian...